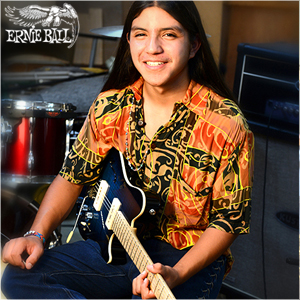 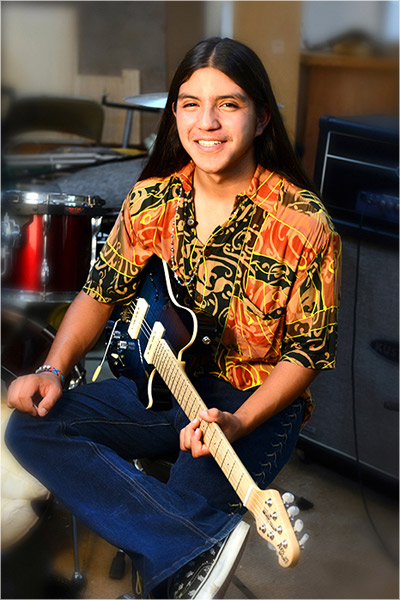 Anthony Cullins aka “The Fallbrook Kid,” a 15 year-old musical prodigy whose guitar playing ability is years beyond his age. At 9 months of age, when Anthony first began to walk, he went around the house constantly banging on everything he could get his hands on, particularly pots and pans. He got his first guitar when he was 3 years old. When he was 9, Anthony began taking guitar lessons from Larry Robinson and soon enrolled at the School of Rock where he quickly became a standout. Anthony’s musical influences include R&B, funk, the blues, and guitar greats from the 60s & 70s such as Jimi Hendrix and Eric Clapton.

Anthony has had the opportunity to play with and study under many great musicians that have been on the music scene for many years. Some of the legends he has been honored to sit in with include:
• Bill Magee (one of San Diego’s busiest working blues guitarists)
• Rock & Roll Hall of Famer Greg Douglass (former guitar player for the Steve Miller Band, Van Morrison, and others)
• Roni Lee (Venus & The Razorblades)
• Ron Blair (former bass player for Tom Petty & The Heartbreakers)
• Blues Hall of Famer Darrell Mansfield (contributed vocals and harmonica to many artists’ recordings including Eddie Van Halen, Jon Bon Jovi, and Loverboy)
• Stevie Salas (guitarist who has recorded on over 70 different albums with George Clinton, Justin Timberlake, Buddy Miles, T.I., Mick Jagger, Rod Stewart, and more …)
• Kevin Cooper (2007 Grammy winner, Broadway and TV entertainer)
• Jay Gordon (lead singer and original member of the alternative metal and electropunk band Orgy which he founded in 1994)
• Jackie Bertone (percussionist)
• Laura Chavez (lead guitar for Candye Kane)
• James Harman (American blues harmonica player, singer, and songwriter)
• Fabrizio Grossi (music producer/mixer; bass player)
• Lance Lopez (Texas blues rock king)
• Alvino Bennett (drummer for Dave Mason)