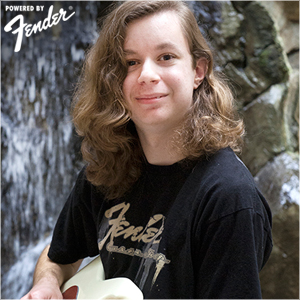 " My name is Austin Morgan and I am a 17 year old self taught musician with the exception of 3 months of instruction by my friend and mentor David Albertson from IMI Studios. " 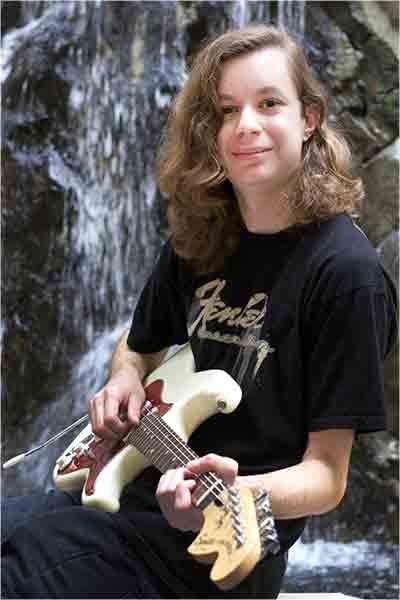 My name is Austin Morgan and I am a 17 year old self taught musician with the exception of 3 months of instruction by my friend and mentor David Albertson from IMI Studios. I have been playing guitar since I was 12 and a half years old but if you look back at my childhood pictures, as young as age 3, I have always had a guitar in my hand. I don’t really come from a musical back ground, both of my parents do not play music, however I have been told that I have had relatives that have loved to sing and play guitar on my dads side of the family. My musical journey all started when My brother Blake and my dad realized my potential for playing the guitar when I mastered the game of guitar hero on Expert. I could be in the kitchen carrying on a conversation, while in the middle of a guitar hero game and I would not miss a note. I spent hours and hours playing this game mainly because I loved the music. So, when I was 12 years old my dad asked one of his friends to borrow his 1969 Gibson Flying V for a while so that I could practice on a real guitar. I found my days and nights being consumed with learning music off of youtube and it was about a year later that my dad and brother could tell that I was not going to give up playing the guitar. I was living and breathing music so, at this point my brother Blake suggested to my dad that he was going to sell his Off road quad and buy me a guitar that I had been wanting from Guitar Center to surprise me for Christmas. When I opened that guitar Christmas morning, it changed my life. I went from a kid who spent hours on video games to a kid that now spent his time learning to play the songs from the guitar hero game on his real guitar. My dad had a big influence on me learning certain songs and techniques, he would hear a Blues song that would be very difficult for me, so he would offer me $10- $20 dollars at a time to learn the song. However, I had to learn the song perfect note for note in order to get the money this was the start of my deep love for learning Blues music. After about a year of learning to play Guitar, I met my friend Ryder who was my age (13) at the time and he invited me to my very first live Blues Jam at the Valencia Club. I had such a great time! I couldn’t wait to get home and learn a few more songs to play live, so each week I would show up and get a little better. I found my self loving to play the Blues as well as Rock and Roll. My inspirations for playing music are Stevie Ray Vaughan, Joe Bonamassa, BB King, Jimmy Page, Jimi Hendrix and Angus Young. Last August (when I was 16) I was one of 5 kids selected to travel and play Blues music in London with the great Fernando Jones and The Blues Kids of America. What an amazing experience I had playing the Blues in London. Now, I invision my self playing music all over the world! Music is the universal language that is spoken in every country and I can’t wait to visit them all. I truly believe the sky is the limit!