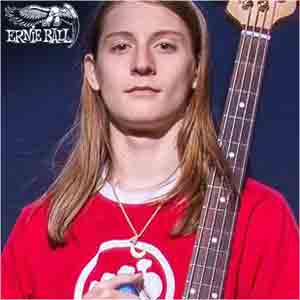 " My name is Caleb Davis. It's debatable where I truly began my career in music " 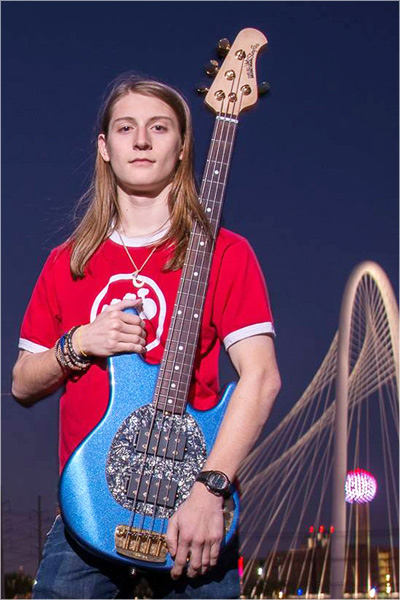 My name is Caleb Davis. It’s debatable where I truly began my career in music, but my first encounter with music was piano lessons when I was little. I didn’t really enjoy it. I liked making music, but I wasn’t overly fond of the keys instrument, so I never did my homework. When I was about 11 or 12 guitar hero came out, and I happened to get a copy. It took me forever to figure out how to play it. I’d say that Guitar Hero was what got me into rock music. I developed an obsession with Slash from Guns N Roses for a while. Then I was into eighties music for a while, but I still hadn’t actually picked up a guitar. I first picked up a guitar after hearing Andy Mckee play a cover of Africa by Toto. Combine that with the (admittably easy to learn) soundtrack from The Last of Us, and i was soon learning my first chords. I was still never too serious about it though. This was during my freshman year I think. I also had been reading the Scott Pilgrim books, and figured maybe i should try playing a Bass sometime. Sometime during freshman year, my father joined a band called Prime of Life, playing drums for them. I had been hanging out after they finished Rehearsal, and Keith McCarty allowed me to play his Stingray 5, and i instantly fell in love. I got a job as a lifeguard and started learning a few basslines from Gorillaz and Silversun Pickups. I bought my Musicman Stingray that summer of my sophomore year. I took lessons from a few different sources…

but none of them really satisfied me

They all wanted me to learn theory and didn’t really teach me what I wanted to know. I was just starting out and all I wanted to do was jam out and stuff. Eventually my family and I found School of Rock, and it wasn’t too long until I signed up. My first season there was Radiohead vs Beck, and it was run by Steve Phillips of Vinyl. Steve had a huge impact on me as a musician and taught me a lot of the tools of the trade. His band Vinyl quickly became one of my favorite bands of all time, outshining other bands I had loved for years such as Pearl Jam and Silversun Pickups. I learned a lot from the teachers at School of Rock Southlake and eventually I was put on the Dean’s List, which is sort of like a special representative band. Marty Morris constantly pushed me to become a better musician, and it’s because of his tough love that I am where I am today.

The summer of my… I think Senior year, I applied for School of Rock Summer tour. I was actually lucky enough to be chosen, and learned a lot of cool stuff from the kids on that tour, as well as from the teacher, Ray Kidd. Ray Kidd is why I have the stage presence I do today. I also met Drummerhood member Travis Harwick on that tour, but had no idea he was a member until recently. Small world I suppose.

Today I’m in a band called Bessemere with fellow Brotherhood member Griffin Tucker, and Drummerhood member Dakota Redmond. Griffin is a particularly talented individual, and I’m hoping that he can make me a better bass player.

I listen to a lot of music but I’d say there’s two or three big sources when it comes to my writing, especially as a bass player. Hunter Johnston and Vinyl. Vinyl consists of Justin Hawkins, Steve Phillips, Dustin Fleming, and Hunter Johnston. After I aged out of School of Rock, I took lessons from Hunter for a while, which was a dream come true. Vinyl is still one of my favorite bands to this day. It’d be like taking lessons from John Paul Jones or Paul McCartney, but the teacher has a better moustache! He certainly influences how I write my basslines, and his tone impacts my choice in guitars. It’s because of Hunter that I play my Music-Man Caprice! Keith McCarty of Prime of Life. Keith is a very melodic bass player. His basslines are very upbeat, and catchy. I try to write basslines that grab attention like his do. Learning his basslines early on was a big part of what I write today. Silversun Pickups. I honestly don’t know how to introduce this band. I was just casually scrolling through youtube and happened to see a thumbnail for Lazy Eye, and thought, “Why not?” I fell in love. When Brian said “I’ve been waiting” I almost thought to answer “me too.” I’d been waiting for a band with a sound that was so… me! I identify very strongly with Silversun Pickups and the way they write and sound. Brian’s tone impacts my pedal choice and vocal sound. His unique combination of sounds are reminiscient of My Bloody Valentine, and Smashing Pumpkins. Silversun Pickups even shares initials with the pumpkins! As well as Scott Pilgrim! This band is very personally dear to me, and I don’t think I’ll ever stop listening to them.