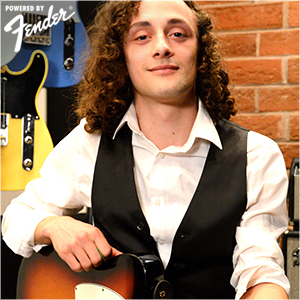 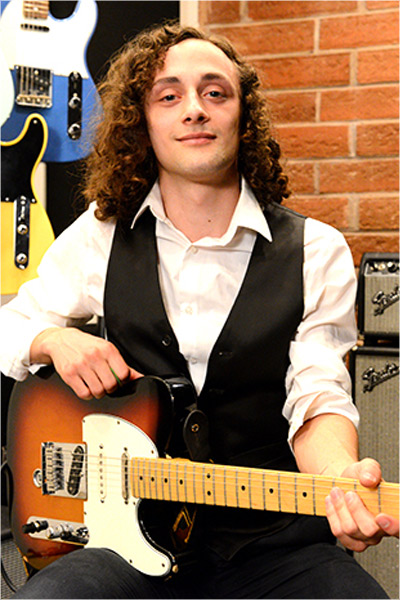 “Despite ringing ears and weary eyes from standing beneath a shower of blood red lights, one couldnʼt help but emerge from that dark, sweaty club feeling reborn. Dreʼs a f***ing rockstar and Iʼm not entirely convinced heʼs actually human. Certainly everyone in the room that night left reminded of why they fell in love with music in the first place and as a bonus, one hell of a story to tell their wide-eyed grandchildren someday.”

I was raised in a musical home. After picking up a guitar at the age of 13 I began studying at the Princeton School of Rock Music in Hamilton, NJ, under Jason Mather, a GIT top of class graduate and Pancho Garza, a jazz guitarist who introduced me to Django Reinhardt, John McLaughlin and Charlie Parker. In 2009 I became a member of the school’s touring outfit, appearing in a documentary for VH1, “Woodstock, Then and Now”. I have shared the stage with Earl Slick of David Bowie/John Lennon fame, Steve Howe of YES, Joe Lynn Turner of Rainbow, Twisted Sisterʼs Dee Snider and the legendary Miss Gloria Gaynor at venues across North America from NYCʼs B.B. Kings & Waldorf Astoria, to Philadelphiaʼs Electric Factory and the NAMM show in Anaheim California. In November 2011 I appeared in Guitar World magazine. I formed a two-piece heavy blues band, Resin Gypsy, as guitarist/vocalist & producer with drummer Kaleen Reading in January of 2012. In less than six months, we released a full length record, met with praise from media and peers, opened for the legendary heavy metal band, ANVIL, were featured in major area publications and received heavy airplay on 89.5 WSOU (named the countries #1 College Radio station by Playboy Magazine in 2010). WSOU DJ Type-A described the band as “perfect”. Tim Bogert, of the premier 60ʼs psychedelic rock band, Vanilla Fudge, praised my playing saying, “Good rock band. Nice, nice guitar work”. Don Jamison, of VH1ʼs, “That Metal Show”, said, “Resin Gypsy is terrific! It made me happy to hear something so well done, original and creative but with a real old school Cream type of vibe.” I travelled to Gulf Shores Alabama to perform at Hangout Music Festival on a bill with Jack White, The Red Hot Chili Peppers and the Dave Matthews band in May 2012. Following a North American tour the following July, Philadelphia rock trio, Satellite Hearts, enlisted my talents and began performing across the East Coast. JERK magazine described the band as, “The Clash infused with unpolished 80ʼs brat punk that trekked through the 60ʼs while flirting with bell-bottomed psychedelics and heavy rock nʼ roll jives.” Following appearances at major festivals including Indie Week Canada and MOVE Music Festival in Albany, NY, the band released a three song EP, “Four to the Floor”, recorded at Converse Rubber Tracks Studio in Brooklyn, NY and mixed by Jason Finkel (Justin Timberlake, Green Day). My most recent endeavors include an EP with Philadelphia funk rockers, Black Stars, who in January, performed live on the radio for over 500,000 listeners, and producing content for my YouTube channel. You can learn more about my work at: