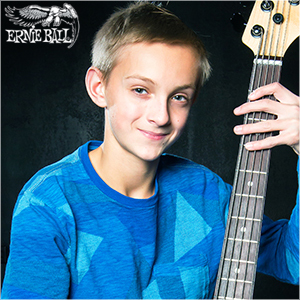 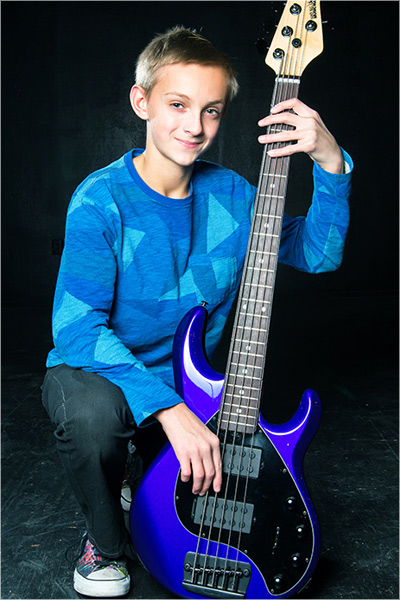 13-year-old electric bassist Gabriel Severn began playing at 7, but was already drawn to the bass by age 2. As a toddler, he’d point the bass out at performances and festivals while watching his dad play. It was then that he developed an ear for Jaco Pastorious’ music, and loved listening to bands such as the Yellowjackets and Weather Report during car rides. In 2012 Gabriel began private lessons, and 4 months later joined the Uptown Music Collective’s Urban Souls, a Motown tribute band of young musicians ages 7-13. During their 3 years together, the Urban Souls gained significant recognition in central Pennsylvania, performing at community events and benefits, music festivals, and making radio and TV appearances. Gabriel received international recognition when his video performing Jaco’s solo on Havona at age 11 went viral on social media, setting the wheels in motion for a professional career. Markbass founder Marco de Virgiliis invited Gabriel to be the first Markbass/Markworld Rising Star. Also impressed with his playing, Sterling Ball invited him to join the Ernie Ball Music Man family of artists. Gabriel has a line of custom bass strings made by Carlos Pavicich in France. He recently performed at both the Ernie Ball and Markbass stages at the 2018 NAMM Show in Anaheim. Gabriel regularly performs with Bolivian piano phenom Jose Andre in the Jose Andre Trio, and with the UMC’s Just Jazz trio.

At age 12, Gabriel gathered some of central PA’s best and most promising young musicians to form the fusion/jazz/funk trio, Teen Town, with Logan Bedard (15) on drums and Connor Rohrer (18) on keys. Their music spans multiple decades and genres, ranging from originals to Weather Report to Azymuth to Miles Davis. They bring a fresh approach to fusion, and prove that great music is ageless and timeless. Teen Town has toured throughout Pennsylvania, performing at the Dauphin County Wine & Jazz Festival, TEDx Harrisburg, the 2018 Millennium Music Conference, the River City Blues Club, the People’s Choice Festival, the Moravian College Summer Jazz Camp, and the Lock Haven Jazz and Arts festival. They’ve opened for the Ben Wolfe Trio, the Dwayne Dolphin 4tet, the Original Drifters and the Tierney Sutton Band. Teen Town will perform again at the People’s Choice Festival and the Dauphin County Jazz & Wine Festival this year, in addition to appearing at the Christmas City Summer Jazz Festival, the Berkshires Jazz Festival, and opening for the Victor Wooten Trio at the 2018 Boscov’s Berks Jazz Festival. The band will also hold a clinic at the Berks Jazz Fest’s Get JazzED Day, and headline the High School Jazz Festival the evening. Having caught the eye of promoters worldwide, appearances stateside and abroad are in the works for Teen Town in 2018. Gabriel has been a guest with the Williamsport City Jazz Orchestra, the Lock Haven University Jazz Ensemble, the Bucknell University Jazz Ensemble, and at the Ann Arbor Art Fair. He’s performed with a variety of bands at the Scranton Jazz Festival, the Lock Haven Jazz and Music Festival, the Dauphin County Wine & Jazz Festival, the Williamsport Welcomes the World Festival, the Lycoming County Fair, the Dauphin County Music and Wine Fest, the Downtown Billtown Music Festival, and the Central PA Jazz Festival. He’s played double bass with the Williamsport Symphony’s Junior Strings and plays in his school concert and jazz bands. He has also been in several mainstage UMC productions. In addition to studying privately with Tim Breon, his teacher since he began playing, Gabriel takes lessons from Anthony Wellington and Adam Nitti. As the recipient of Wellington’s Bassology scholarship, Gabriel was honored to spend a week with Victor Wooten, Wellington, and a handful of some of the finest bassists and teachers in the world at Victor’s Bass/Nature Camp near Nashville. An enthusiastic learner, he’s also attended the Central PA Jazz Camp for 3 years, Gerald Veasley’s Bass Bootcamp, and the Keystone Jazz Institute. He was a student at the UMC for several years, learning music theory and tech, and participating in the jazz workshop. He’ll return to Veasley’s Bass Bootcamp this year, and will attend the Berklee College of Music’s Groove School in the summer.