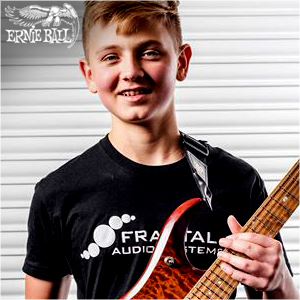 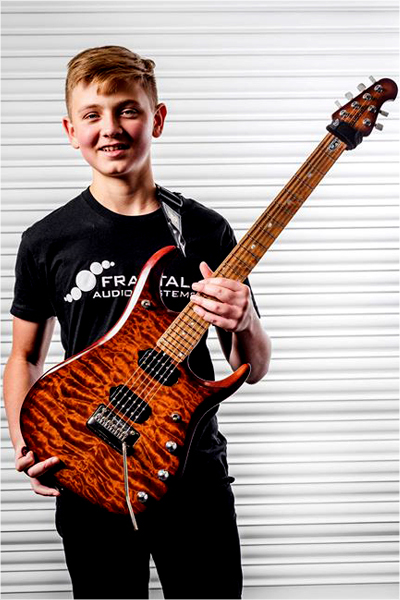 Hunter Hallberg (Born 09/04) grew up around a variety of great guitar music playing in the house. At the age of 9 while taking piano, he decided he wanted to learn guitar instead, after picking out a starter guitar and amp at Guitar Center, he saw that John Petrucci was going to do a workshop in a few weeks. Hunter went to the master class and he was so inspired, that he committed to practicing hard so he could someday be as good as JP himself.

At the age of 10 he participated in a local Guitar Solo contest as the youngest contestant and took 4th place overall (all ages) and scored the highest on technical performance with a Dream Theater song.

In 2016, he submitted a video for 106.7 FM KBPI & Denver School of Rock’s Best kid Guitar player contest and became the first annual guitar winner. Since then Hunter has been very active with SOR Denver and has played cool venues with them such as Red Rocks Amphitheater and other major local festivals.

Recently Hunter entered a video in the worldwide guitar contest “Young Guitarist of the Year” with Musicradar.com, and he flew to London in late September of 2018 to compete in the live finals and was crowned the winner!

Hunter and three other young teens formed the band Running with Scizzors in 2017 playing awesome covers they recently opened up for a national acts Trapt and Drowning Pool. The band also wrote an original song ‘Spite” that got some local airplay.

Hunter is very excited to be inducted into the Brotherhood of Guitar and is looking forward to collaborating with other BOTG members and growing as an artist.

Hunter is endorsed by Fractal Audio and is very excited to join Ernie Ball Music Man Guitars, as Hunter has played an EBMM JP-15 and a Majesty 7 for a few years and considers them to be the finest guitars available.