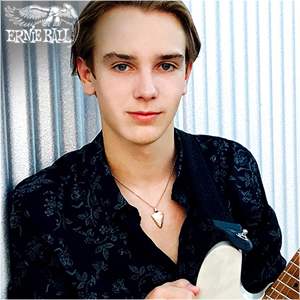 " Jack Hickman is a guitarist from Denton, Texas " 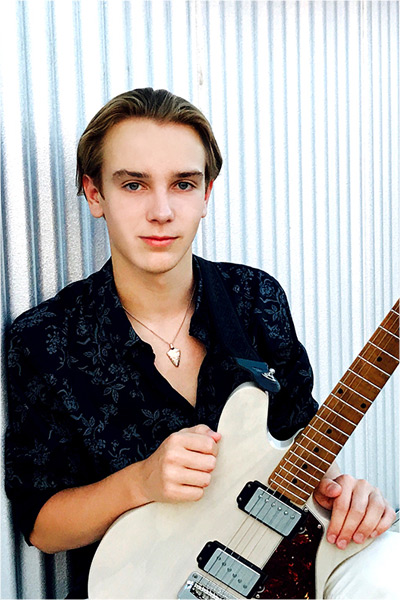 Jack Hickman is a guitarist from Denton, Texas. Born in 2003, he is the youngest member of Dallas-based alt-rock/alt-pop band, Love Past Blue™. Though neither of his parents are musicians, Jack started showing an interest in the guitar at a very young age, beginning lessons at age four on a ¼ size Classical. By age nine, he had taken up the electric guitar, and quickly developed a passion for the rock genre. A year later, he began studying under Dan Dockrill at Bonduris School of Music. In 2016, Jack met Love Past Blue, when both were finalists in the Dallas International Guitar Festival’s Texas 10 Under 20 Competition. Jack made an impression playing Joe Satriani’s ‘Satch Boogie’. When Love Past Blue’s previous guitarist suddenly moved on to other projects a month later, they contacted Jack on vacation about coming to audition. It was a match. Jack played a gig with the band just hours after they met, the day he returned from his trip. That success began a year filled with gigging, travel, festival performances, radio interviews, songwriting and recording sessions. Love Past Blue’s selftitled EP is available on iTunes, Amazon and Spotify, and a follow-up album is in the works as of summer 2017. Things came full circle at the 2017 Ten Under 20 Competition, where Jack again performed as a finalist, this time playing Rush’s ‘Working Man’ with his bandmates from Love Past Blue. Jack’s musical tastes span alternative rock and progressive rock genres, as well as jazz, with influences from artists like Incubus, Red Hot Chili Peppers, Maroon 5, Rush, Buckethead, Snarky Puppy, and Led Zeppelin. When not playing or listening to music, Jack enjoys competitive swimming and hanging out with friends.