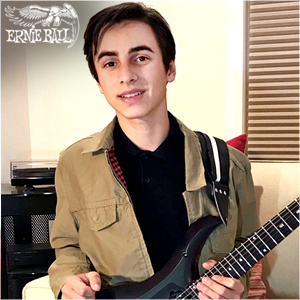 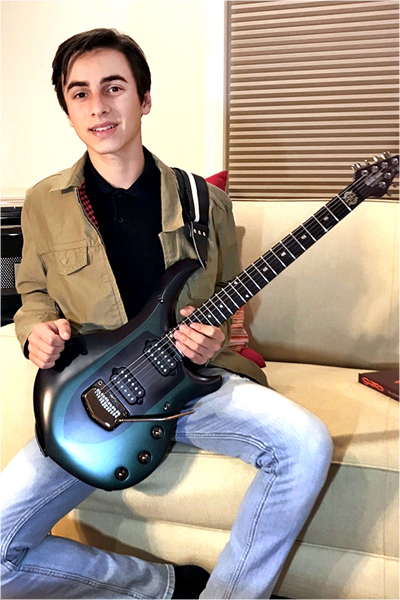 Jack Martino is an aspiring 14 year old guitarist from Southern California. He discovered his love for the instrument at age 9 when he started picking notes on his dad’s old Telecaster. His parents quickly recognized his enthusiasm and signed him up for guitar lessons and has never turned back. His early musical spirit came from Eric Clapton, Brian May, Tony Iommi and Randy Rhoads. Current inspirations stem from broader styles of rock music including progressive, alternative, and metal. John Petrucci, Eric Johnson, and Synyster Gates are among some of his favorite modern artists.

He still works with his original guitar instructor, Jym Schwartz, to enhance his technique. Jack focuses on melody and advanced time signatures and likes to push himself beyond what he thinks he can do. He also studies the piano, woodwind instruments, and is an amazing bassist. He loves to play with other musicians that share his joy and passion for creativity.

When Jack played his first Music Man Majesty, he fell in love instantly. The Majesty accommodates his playing style perfectly.

Jack is an articulate composer that creates complex melodies for his band, Stereo Fidelity. They have performed numerous shows at the legendary Whisky-A-Go-Go and other Los Angeles venues. Jack’s signature guitar style is well captured on his band’s debut EP titled Fever Dream.