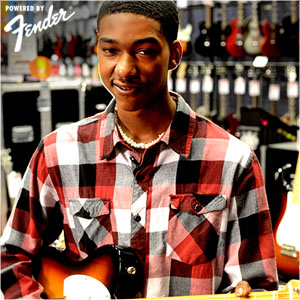 Facebook
" Jamiah grew up in a household of musicians. The first hands on experience with music came at the age of three. " 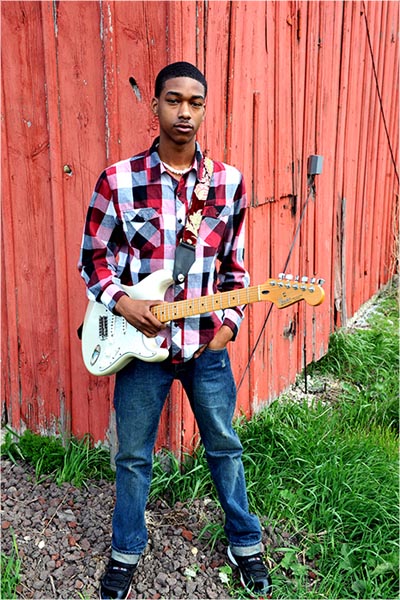 Jamiah grew up in a household of musicians. The first hands on experience with music came at the age of three. Jamiah’s father and guitarists, Tony Rogers, had a band that rehearsed every now and then in the basement of the home. You could tell Jamiah was listening because he would come and sit on the stairs and sneak peeks of the bands rehearsal. Every time rehearsal was over he would get on the drums and play. After a couple of months of racket on the drums, Tony figured it was time to teach Jamiah the pocket.
Many father and son lessons and three years later Jamiah started playing at church, local nursing homes, open mics, Drum-offs, and festivals. People were very impressed with what they saw and heard coming from this young talent. At age 7 Jamiah recorded his first CD “In the Pocket” which opened doors for him. Jamiah was soon noticed by high positioned people around Chicago land. Jamiah was nominated for “The most talented kid under the age of 12” for The Chicago Music Awards and won for 3 consecutive years.

As the years passed, Jamiah became one of the top drummers in his age group but Tony thought it was time for Jamiah to pick up a new instrument, the guitar. So Tony bought Jamiah his first Fender since the one Jamiah’s mother bought him did not last very long, More father and son lessons came and those lessons consisted of teaching Jamiah all the songs his father knew and played. The next step for Jamiah and the guitar was to expose him to performing up front with a microphone. Jamiah continued to play open mics to gain valuable experience fronting a band.. More practice and exposure produced good results. Jamiah performed and played “Voodoo Child” for The Chicago Music Awards and won the most talented kid over the age of 12.

One of the biggest doors opened up for Jamiah. He attended The Experience Hendrix Concert Tour in Chicago at the Chicago Theater. Jamiah walked in the backstage door and knew he was where he was supposed to be. He met many of his heroes but the one he will never forget was Billy Cox, one of Jimi Hendrix’s bass players. Tony took Jamiah to the green room so he could play but little did he know Billy Cox was listening. Jamiah closed The Experienced Hendrix Tour with Billy Cox and played “Red House”. The music dream was finally starting to open up! At age 16 Jamiah fronts his three piece power trio, Jamiah On Fire & the Red Machine and has recorded his second CD titled “Taking the Stage”. It features ten original songs written and produced by Jamiah and Tony Rogers. Jamiah continues to play his music at major festivals and Canada as well. Jamiah is all about writing, producing and performing good music for fans! Become a fan of Jamiah “On Fire” & The Red Machine.