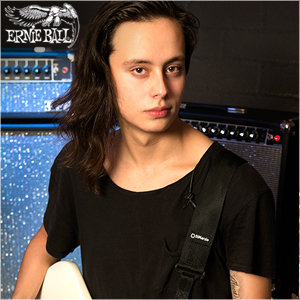 " Josh J. is a 20 year old guitarist and producer based out of Los Angeles "

Josh J. is a 20 year old guitarist and producer based out of Los Angeles. Josh has been playing music since he was 7, and started playing the guitar at age 11. Guns N’ Roses and Slash are what turned him onto the guitar at an early age. His favorite players include Jeff Beck, Steve Lukather, Jimmy Page, Steve Morse, and Jimi Hendrix. Josh grew up in a small California town in the high desert called Barstow. With not much going on there, he stayed focused and practiced 8 hours a day every day. Eventually Josh finished high school early and moved to Hollywood to pursue his dream. So far Josh J. has met and played with many of his heroes, gone on tours, and experienced life as he dreamed of it. In just 6 months, Josh has gained over 10,000 followers and 1 million plays on Soundcloud. Today Josh J. is producing his own music and playing with various artists all over. To hear Josh J.’s music, go to soundcloud.com/joshjarmusic