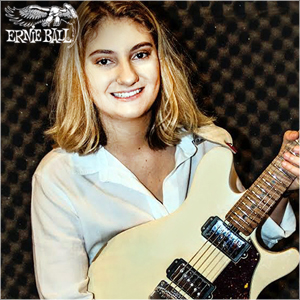 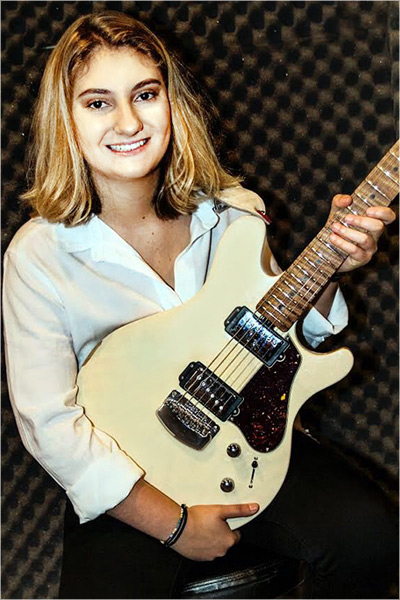 It was a full moon, on Friday the 13th in October of 2000 when Lia Spanos made her debut. Always musical, at the age of 9, she picked up her sister’s old guitar and began picking out classic tunes such as, “The Joker” and “Sunshine of Your Love”. Lia has been glued to the guitar ever since. At 11, she started playing at local bars and by 12 was in her first band. Her next band was selected to play at the kick off event for the National Blues Museum and then invited to be the first band to hit the stage at their Grand Opening. In May of 2017, they played at the ribbon cutting of the new St. Louis Gateway Arch monument grounds. It was after a performance at the National Blues Museum that she received an invitation from Robert M. Knight to join the Brotherhood of the Guitar. Lia has been honored to be a School of Rock AllStar. The program selects only 174 students out of 25,000 from nine countries. As an AllStar, she has been privileged to play on some iconic stages, such as Lollapalooza, MoPop Festival, the Knitting Factory, the Wonder Bar, and the Crofoot. Major influences such as John Scofield, Prince, Kevin Parker, Nick Drake, Frank Zappa, Jimi Hendrix, Chet Atkins, Wes Montgomery, Bernard Purdie, Stevie Wonder, Buddy Holly, Jaco Pastorius, Ween, D’angelo, Jerry Garcia, Beach Boys, James Brown, Tribe Called Quest and Thundercat, have instilled in Lia the desire to keep learning and listening. She is passionate about writing, composing and producing her own music. To quote Lia, “I will play music for the rest of my life, any music, all music, all of the time.”