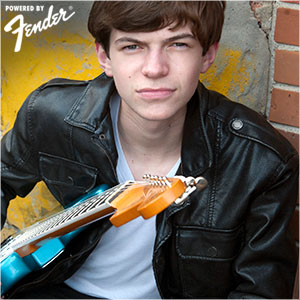 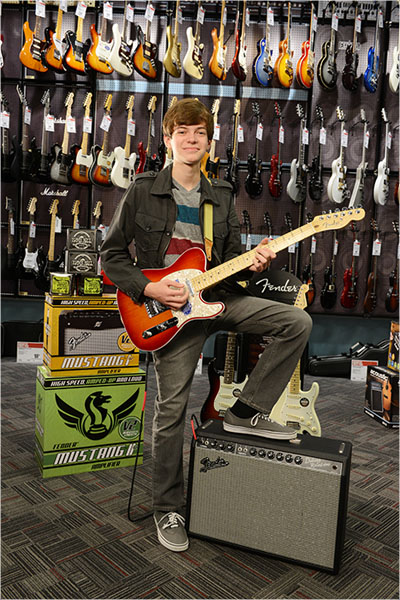 Member of “Brotherhood of the Guitar”, sponsored by Fender, Guitar Center and Ernie Ball

Fifteen-year-old award-winning guitarist/vocalist Matthew Davidson from Shreveport, LA began performing professionally in 2010 and since then “has achieved an immense amount of recognition, support and admiration”, according to International Musician magazine. With musical influences as diverse as The Beatles, Stevie Ray Vaughan, Maroon 5 and John Mayer, Davidson is a triple-threat: guitarist, vocalist and songwriter…performing rock, blues and pop with equal command. Matthew released his debut EP “Step Up” in 2012, produced by legendary bassist Joe Osborn. “Matthew has been making some major waves in the music world, and stunning the ears of multiple guitar enthusiasts and organizations across the country”, reports Guitar International. To date, Matthew has over 225 performances to his credit.

Acclaimed photographer Robert Knight recently invited Matthew to join “The Brotherhood of the Guitar” (BOTG). The BOTG is a project launched by Knight and sponsored by Fender Guitar, Guitar Center, and Ernie Ball. The BOTG’s purpose is to shine a spotlight on a select group of unsigned up-and-coming young guitar players from around the world. Knight recently filmed an interview with Matthew and photographed him at the Guitar Center in Shreveport. Matthew will be featured in an upcoming issue of Guitar Center’s monthly national catalog “At: Guitar Center”.

Davidson got his first taste of guitar at the age of three, when he received a toy guitar for Christmas. He started taking lessons on an acoustic guitar in the second grade and won his first electric guitar in the 2007 James Burton Foundation’s Guitar Showdown. He was the youngest of eight student guitarists selected to play with Kenny Wayne Shepherd at his 2009 Artbreak Concert.

Matthew performed in the Youth Showcase at the 2011 International Blues Challenge in Memphis, TN and while there jammed at the B. B. King Blues Club. He also was selected to perform in the “Texas 10 under 20 Showcase” at the Dallas International Guitar Festival. In Mississippi, Matthew has played at the B.B. King Museum and the B.B. King Homecoming Concert in Indianola, the Delta Blues Fest in Greenville, and the Ground Zero Blues Club and Pinetop Perkins Homecoming Celebration in Clarksdale. Matthew has performed at Rock ‘N’ Bowl, The Ellis Marsalis Center for Music and The Old U.S. Mint in New Orleans, Bibb Graves Hall in Alabama, The Strand Theatre, and on the stage of the legendary Municipal Auditorium, home of the famed Louisiana Hayride. Matthew is the youngest member to date of the American Federation of Musicians Local 116, having joined at the age of twelve. His most recent honor was being invited to join Kenny Wayne Shepherd on stage at the 59Twenty Music Festival in Meridian, MS.

Be sure to check the Reviews page to read what people are saying about The Matthew Davidson Band!