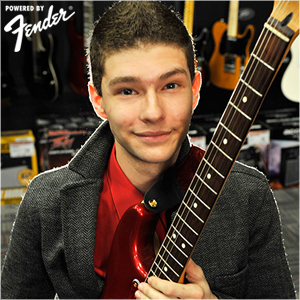 Facebook
YouTube
" At age 9, Tommy's mom and dad got him his first guitar, which was a Squier Mini Stratocaster. " 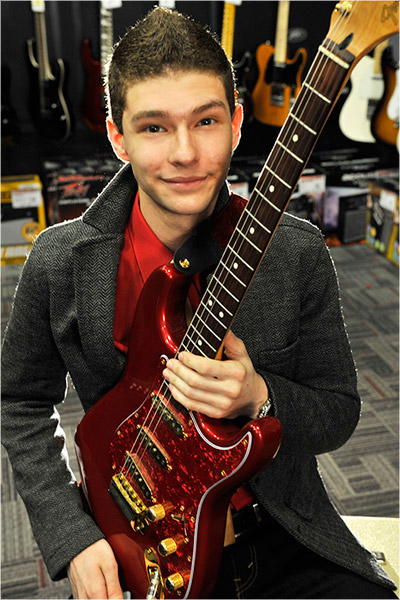 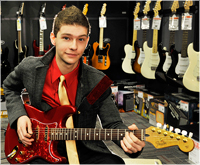 Tommy Baldwin was born on March 27th, 1996, and raised in Indianapolis, Indiana. At age 9, Tommy’s mom and dad got him his first guitar, which was a Squier Mini Stratocaster. At age 10, they got him his first real-sized guitar, an Epiphone SG. Which he played on his lap, and with his thumb. Later the same year; December 19th, 2006, Tommy’s dad died. It completely changed his entire life. But he found comfort in music, and in the emotion of the blues, rock- blues, and smooth jazz. His devastation, became his inspiration. He’s never laid the guitar down since then. Now, eight years later at age 18, he plays professionally around Indiana with his band, The Tommy Baldwin Trio, featuring Galileo Asher and Elijah “The Animal” Pollard. They’ve played with many bands and venues. Tommy has also played venues such as Animals and all that Jazz – Indianapolis Zoo, The Palladium (Twice) – Carmel Indiana, Indiana Beach, Madam CJ Walker Theatre, The Murat Theatre (Egyptian Room), and many more venues and private gigs. They have also been on live air radio shows such as WZPL 99.5, Penny Lane’s Giant 96, WJEL 89.3 ,and more. Now, trying to get signed/a record deal, Tommy writes, records, and arranges his own music and lyrics for the Tommy Baldwin Trio. He hopes one day soon to fulfill his lifelong dream; to be heard all around the world as The Tommy Baldwin Trio, and to get his message out there; To establish peace, love, and coexistance within the entire world through music. His musical influences are Larry Carlton, Stevie Ray Vaughan, Eric Gales, Jimi Hendrix, Eric Clapton, Slash, Jonny Lang, Kenny Wayne Shepherd, Joe Bonamassa, BB King, Albert King, Peter Frampton, Jimmy Page, Wes Montgomery, Robin Ford, and many others..